A standard installation for us means that we will be using the xrdp package available within the Ubuntu repository. To install the xrdp software from Ubuntu repository, you will need to issue the following command in a terminal.

Because of the sudo command, you will be prompted for a password. After entering your password, you will be asked to confirm your action by pressing Y (see screenshot below) 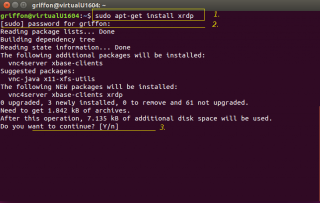 xrdp and Unity desktop (or Gnome 3) are not working well together.  If you do not install another desktop environment, when you will try to connect to your Ubuntu machine, you will see only a gray screen.  The workaround to this situation is to install an alternate desktop that can work with xrdp software solution.

Our preferred desktop alternative is Mate-Desktop.  This post will show you how to install the Mate-Desktop and have it working with the xrdp software solution.

To install the Mate-desktop, issue the following command from the Terminal Session

Desktop interface such as xfce, LXDE,LXQT, KDE  are all potential candidates.  Check the following links for more information and installation and configuration procedures

Step 3 – Configuring xRDP to use your desktop environment

At this stage, we need to configure our system in order to tell xrdp that an alternate desktop needs to be used.  In our case, we have to tell xrdp that we want to use Mate-Desktop as alternate desktop. With the previous version of Ubuntu, you would need to create the ~/.xsession file.  In Ubuntu 16.04, it seems that this approach is not working anymore.  We need to configure the system differently when working with Ubuntu 16.04

In our scenario, we have installed mate-desktop, If you have installed another Desktop alternative, you will have to adapt the configuration of the startwm.sh file to reflect your settings.

If you use the  ~/.xsession file approach, you will experience the same symptoms as before i.e. grey screen. We will need to configure the system in a different way.  To have xRDP working in Ubuntu 16.04, you will need to  update the /etc/xrdp/startwm.sh file. To configure this, issue the following command in your Terminal console

Remember that the command above is  to be used when you have installed the Mate-Desktop.  If you have  installed a different desktop environment, you will need to adapt the  command accordingly. Please check the following links

In my case, I’m using a Belgian French  keyboard, so I had to tell xrdp to use the belgian french keyboard as  well.  To do that, you need to perform the following actions :

Step 1 : You go to the /etc/xrdp directory

Step 2 : you issue the command setxkbmap -layout <%your layout%> to define which keyboard map/layout to use

Step 3 : create a copy of the km-0409.ini file into the same directory. It  seems that this is the default file used by xrdp to define the keyboard  layout. You will need to use sudo in order to be able to write into the  directory

Step 4 : Check that you have a backup of your file by typing the dir or ls command

Finally Open Remote Desktop Connect and use the VPS IP and login!

Topics in this forum